We have a Discord Server.

2018 marked the second time Game Dev Graz awarded the Styrian Game Awards (SAGA). Check out the full list of finalists and more details, and have a look below to see this year’s winners.

There are also photos of the award ceremony and winners, and a local article from Screaming Pixels (german).

Once Upon A Nightmare (Audience Choice Award)

Once Upon a Nightmare has won the „SAGA Audience Choice Award“ from @GameDevGraz at the @button_festival last weekend. Thanks for the great support! #onceuponanightmare #gamedev #indiedev #madewithunity pic.twitter.com/GtONRrWoPy

Get together and chat about new indie gems, long awaited blockbuster games,
fancy technology, or your own current projects, all while enjoying a drink with others.

On April 14-16, the EYA Game Jam will take place at FH Joanneum in Graz. 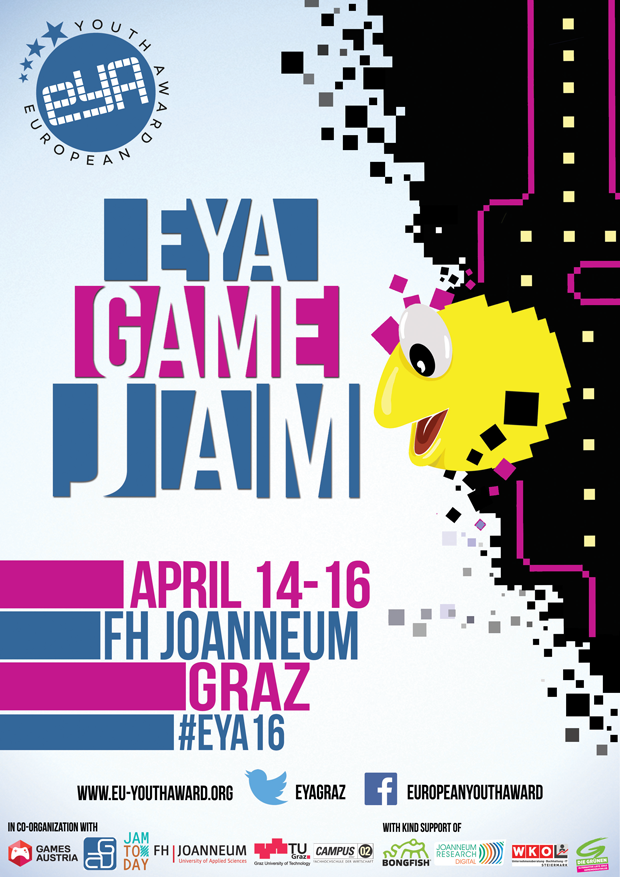 On 1-2 April 2016, the button Festival will return to Graz for 2 days of gaming culture.

Meet and talk to local developers and play their games! Find them in the Game Dev Graz area!

A Hole New World:
Mad Gear Games is born out of a group of Go players who met in tournaments and discovered they also shared the passion for old good pixelated games. While developing their first game in 2014 they made A Hole New World for Ludum Dare 30, got a quite good reception (got to be 50th out of 1000 in overall scores) and decided to make the game bigger and better. We like games like Megaman, Ghouls ‘n Ghosts and Castlevania and we are trying to bring the classic and instant fun style of games back. Awesome pixel art, chiptune music and great playability nonstop!

A Hole New World: A Hole New World is a 2D platform arcade game with NES aesthetics and today’s playability. Play as the Potion Master and his companion Fäy through different worlds in their quest to send all the demons back to their own dimension as they gain new powers and discover the ultimate fate of their lives.

Rarebyte is an established and ambitious game development company from Austria, mainly focused on creating games that are hig

hly entertaining, well-designed and outstanding due to their smart gameplay. The people behind the company originally met as a team of enthusiastic game programmers and artists back in 1999, officially forming the company in 2006, after having gained a lot of experience from both contract work and realization of their own ideas. The first game, Waterstorm, a submarine multiplayer shooter, was released in early 2008. Additionally, Rarebyte was contracted to lead the Macintosh port of the backcountry snowboarding game Drop Point: Alaska, which was released in February 2008. Furthermore, the company has also been developing games for coin-operated touchscreen entertainment machines as well as technology for recent video game consoles. With 10 years in the gaming industry and 25+ titles released we are a reliable partner for game development on all major platforms.

Elementary Minute is a trivia game, where you will be

confronted with statements regarding to topics like Math, Geographie or Famous People. It is up to you to distinguish whether these statements are correct or incorrect by swiping up or down. The game has to modes: Classic and Rush. The first one gives you one minute to get as many answers correct as possible. If you get one wrong, you loose a couple of seconds Playing Rush puts you to a stress test. Here, you get only 5 seconds per question and four lifes. While a correct answer gives you a point, a wrong one takes away one life. Elementary Minute is already released for iPhone, iPad and Apple Watch and was awarded with the Apple Design Award at the WWDC 2015.

Asymmetric is a puzzle game for iOS.

You play as Groopert and Groopine, two poor creatures who where trapped and torn apart. You have to help them escape by navigating them through different stages of a labyrinth via swiping. Since they are deeply connected, they always move at the same time, but contrary to each other. This doesn’t seem like a problem at first, but gets pretty tricky when obstacles like stones, holes, portals or accelerator-pads come into play. The game is currently in development and will be released this year for iPhone, iPad and Apple TV.

This happens at the Game Dev Graz Booth:

The great Journey of Paperman is a 2D puzzle adventure game, where you play Paperman and want to get back home. This game was made for the lecture “Game Design and Development” at Graz University of Technology, considering the diversifier “hatespeech”.

Geo Heroes is a medieval-fantasy adventure on our Earth. Turn on your GPS on your m

obile device and start your adventure. Choose your class and walk through your city…and yes, YOU have to walk :-). But take care, your environment has changed: skeletons, vampires, mighty dragons and many other creatures are now in the near. Your hero can battle against those in tactical turn-based battles and receive epic loot. Level-up and learn new abilities with your character to beat the final boss. More features: tactical turn-based battles, user-generated content, resources, boss-fights, crafting system

Pocket Code is a free Android app that allows you to create your own game apps in a visual, “LEGO-style” programming environment. Pocket Code is inspired by MIT’s Scratch but independently developed and entirely running on smartphones and tablets – no Laptop or PC whatsoever is needed to create or execute your games. With Pocket Code you can super easily create games, animations, or music videos, taking advantage of multi-touch, built-in sensors such as face detection or inclination sensors, and the full display resolution of your device. It also allows wirelessly controlling external hardware such as Arduino boards, Lego Mindstorms robots, or Parrot’s AR.Drone. Pocket Code allows you to download programs that others have made and upload programs to the Web, all under free open source licenses to foster learning, sharing, and remixing. Thus Pocket Code encourages tinkering and allows you to iteratively and cooperatively create your own apps, either alone or together with your friends. And your own first app can be running in less than one minute!

The JAM GAME: JELLY. ACTION. MADNESS. Jump in and start running! It’s only you, your friend and loads of jelly. Who can stay on the table the longest? In this fast-paced arcade game for two players on one tablet, each player controls a jar of jam and must try to be the last one on the breakfast table. Collect fruits, leave slippery jam trails, and push the other player’s jar over the edge. Lovingly crafted with hand-drawn graphics and joyous music, this is a game for all ages, providing short rounds of fun.

Don’t bug me is a local multiplayer racing game. Up to 5 people gather around one keyboard at the same time and try to be just that little bit faster than the other 4. The game is fast paced and funnily confusing when all the players try to hit keys arranged far too close to the opponents keys and fight for their space and rank in the bug race. In the game you choose a bug and try to reach the goal by pressing the key displayed for your bug to make it run faster.

Creepy Castle is a stunning creepy catch game for two players. It is a traditional local multi-

player for two players playing with a splitscreen. You need to find and catch the other player in this creepy castle

Reserve a ticket now: https://www.eventbrite.com/e/gamedevdays-talk-tickets-24251825864 :: GAME DEV SPECIAL:: button-VVK ticket  + talk registration for only 12€; you can get your tickets now at TU Graz or at the button festival (only with Eventbrite registration!).

In 2016, Barcamp Graz will have its first gamedevcamp amongst many great others. The whole event takes place on April 22 to 24, with the gamedevcamp itself being on Sunday the 24th.
Gamedevcamp Graz (link in German)

A few of our members were interviewed by the Austrian radio station Ö1 with topics ranging from the game development process in general, to events like game jams, and the local gamedev community.

You can listen to a recording of the broadcast here (german): http://oe1.orf.at/programm/427525