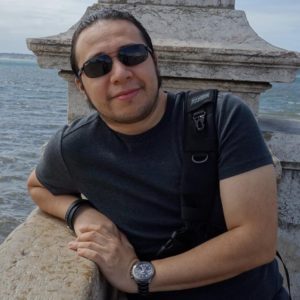 Hector is a Freelance Character Artist from Mexico living in Austria. He has been working in the graphics and video games industry for more than a decade, much of that time as Lead Artist, later as Head of Art, and later as Freelancer.
For the past years, he has worked as part of remote art teams for games including League of Legends, Shardbound, Legend of Solgard, and more recently Fortnite.  He also does a lot of work for 3D print-related industries including miniatures, toys, and collectible statues.  He recently completed the entire miniature line for Street Fighter-The Miniatures Game, and he’s currently working on several other projects with popular intellectual properties. 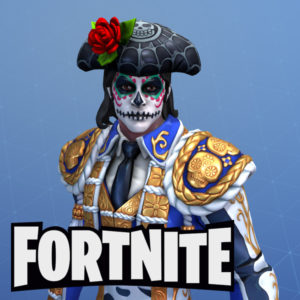 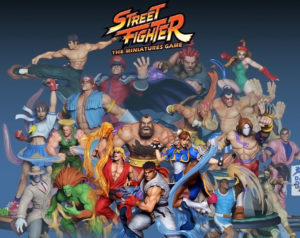 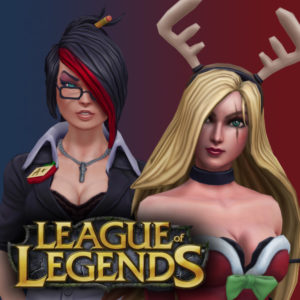 “How the SAGA Award sparked my Career” 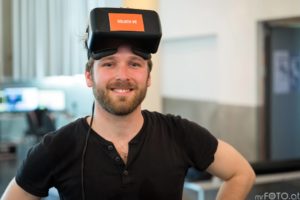 Wolfgang Tschauko studied Psychotherapeutic Propaedeutic at KF Uni, Mediatechnology & -design at FH Hagenberg and Interaction Design at FH Joanneum Graz. His master thesis dealt with the subject of body presence in virtual reality. As a practical demonstration for his research a local two-player coop-game was created named Goliath VR. Goliath VR won the SAGA Audience Choice Award 2017 and the Reversed Best Concept Award 2017 and has since then be exhibited at numerous international game events. The original version of Goliath VR used a Kinect Sensor to create a unique body presence of the player. Since 2018 the project Goliath VR has been modified to work with customer VR devices and has recently been renamed to VR Giants. VR Giants won the Innovation in Games Award (Ludicious Zurich Game Festival).

Meet’n’Play:: Here is a list of games which will be showcased at the game exhibition @ button 2019:

Fight frantic bosses in this fast-paced multi directional shoot ‘em’ up as the world revolves around you. Avoid lethal attacks by dashing across the small arena and take your opportunities to strike back with one of various weapons. Beat several stages presented in a minimalist yet dynamic aesthetic.

VR Giants is a local coop VR game in which one VR player and on gamepad player work together. The VR player controls a giant and must protect and support the dwarf who is controlled by the gamepad player. To solve the puzzles good communication and teamwork is demanded. Weaving Tides is an isometric singleplayer adventure for PC/Mac. Ride dragon-like creatures and use their ribbon tail to stitch up torn areas in a completely woven world. Tie down quirky mobs and pull the right strings to master puzzles while you’re on your quest to unravel the whereabouts of your parents. Currently in alpha, planned release in Q1 2020. 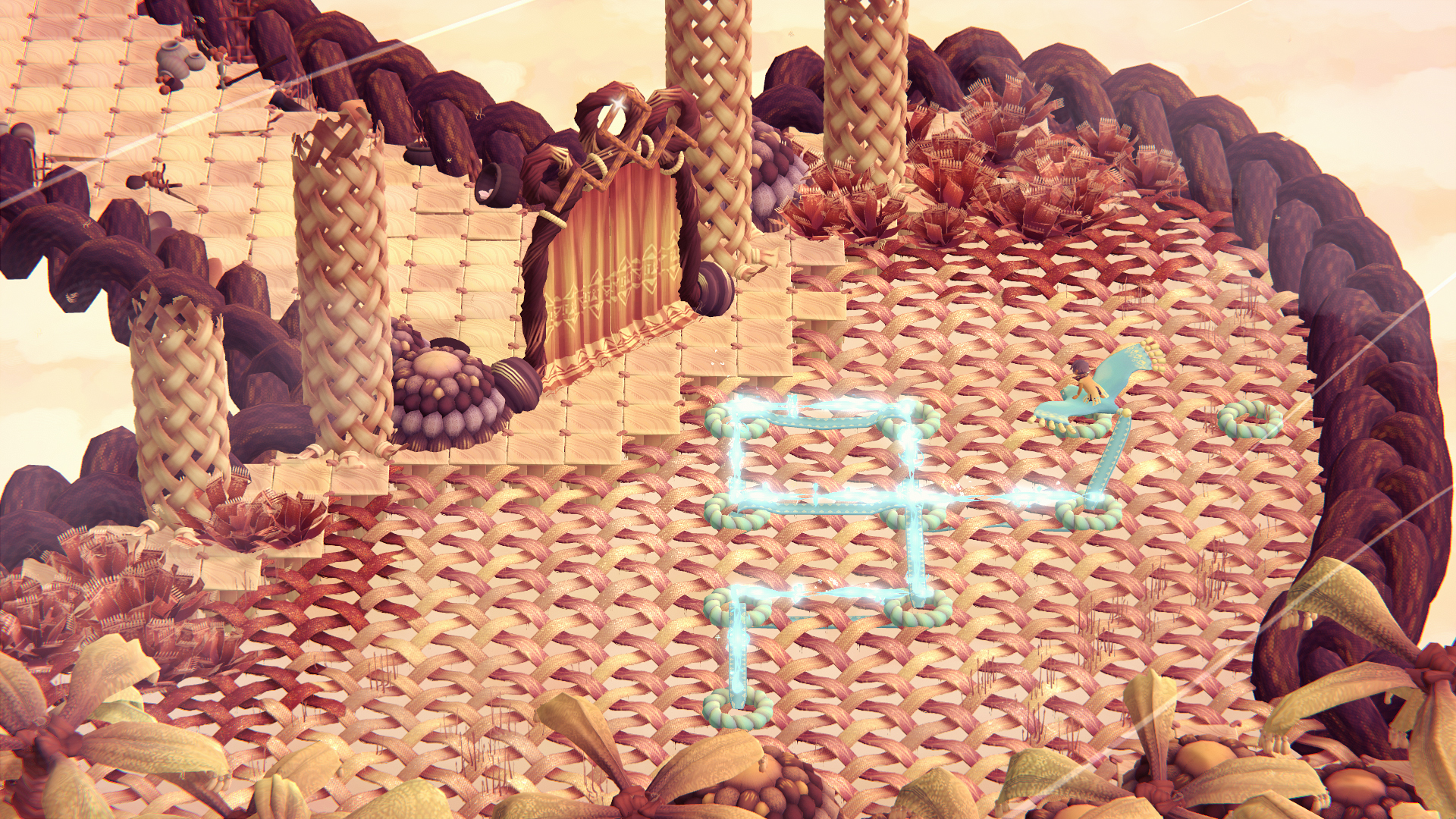 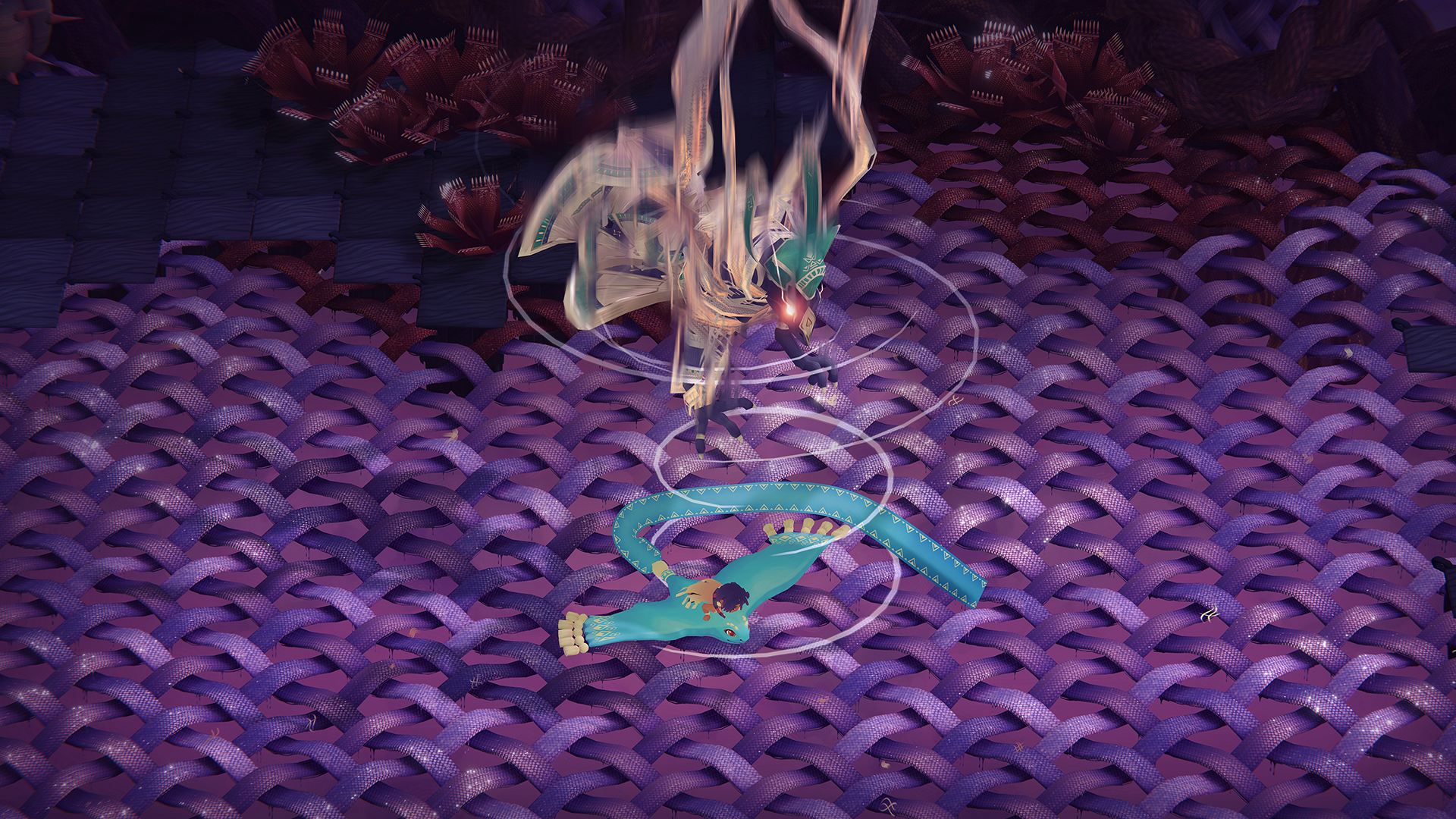 Rarebyte presents We are screwed!

You are the rag-tag crew of the worst space vessel in the galaxy, but that is exactly why you are destined to boldly go where no one has screwed up before!

A F2P Trading Card Game ARPG. We combine the best of all worlds with an infinite amount of cards and some innovation in gameplay. No waiting around for your opponent to finish his turn. 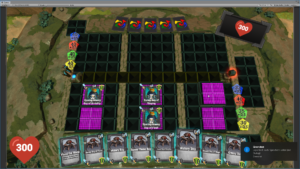 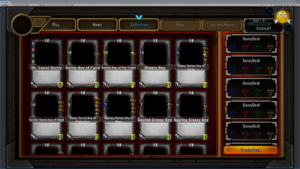 SAGA Finalists:: These five games will be exhibited in the Game Dev area as well @ button 2019:

Hamlet’s Breed is an AR Game where you meet real people which long time ago passed away, depending on your geo-location

“Death divides us, Hamlet’s Breed unites us. AR for the gone.”

Title: WHAT WE LEAVE BEHIND

WHAT WE LEAVE BEHIND is a story-driven roguelike game with point-and-click adventure elements. The game is set in a fictional japanese city where time and space are out of balance. Thus, time only moves when the player moves and the characters and layout of the city change randomly everytime the player dies. To escape this violent place, the player has to either sneak around enemies or fight them by combining items to create chain reactions. Furthermore, all characters have their own branching dialogue and talking to them may result in them joining forces with the player. Characters will remember how the player treats them and interacting with their storylines will have an influence on the final ending of the game.

Fantastic Fetus is a pregnancy simulator in a Tamagotchi style, where you are taking care of a pregnant woman and create your own dream fetus with SUPERPOWERS. You as a player will be able to create an enormous number of unique customised fetuses and unlock 6 different endings according to your decisions.

Fantastic Fetus is inspired by the Black Protest movement in Poland which was provoked by the new proposition of reproductions laws created in 2016 – the anti-abortion bill. Polish reproduction laws are next to Malta the strictest anti-abortion laws existing in the European Union. This game will let you experience a female perspective.

Sikanda is a 3D top-down Action-Adventure with RPG elements, inspired by famous Japanese SNES classics of the 90s. The game takes place on a fantasy island called “Galintrea” and tells the story of a young hero who incidentially found an ancient pendant named “Sikanda”. Throughout the adventure, the hero acquires several skills for “Sikanda” to transform it into powerful weapons and tools. All of them are invaluable instruments in order to fight their way through dungeons and encountering fierce enemies. As the very existence of the island gets threatened by a group of sinister strangers, the hero not only will have to accept that “Sikanda” is the only way to stop them but also that there is a connection between their world, the ancient relic and the hero’s own fate.